Boasting a royal ambience and colourful history telling stories of valiance and chivalry, Rajasthan is a popular destination for tourists worldwide. This incredible Indian state was invaded and ruled by several rulers, but these invasions could not damage the princely state and the beautiful architecture of Rajasthan forts and palaces. Let us look at the famous tourist attractions in Rajasthan, including the state’s popular forts and palaces. 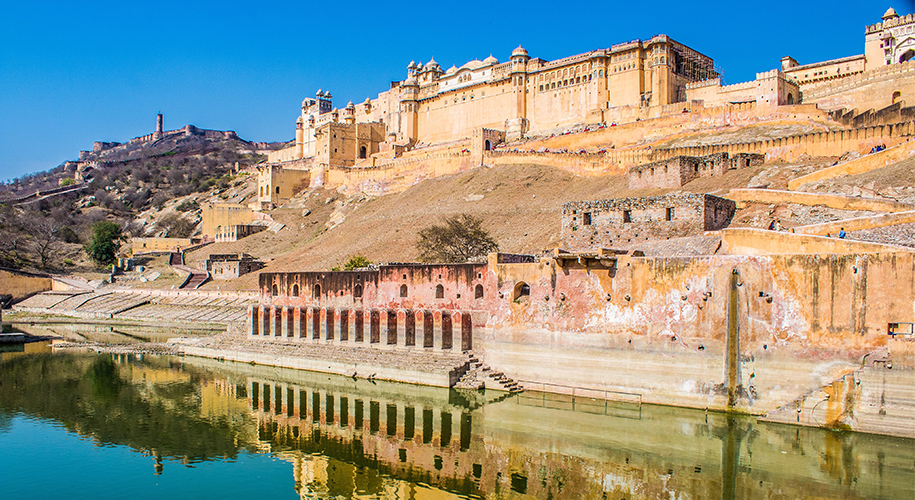 Raja Man Singh, I built the Amber Fort in the 16th century. The magnificent fort overlooks Maota Lake and is situated at the foot of the Aravalli range. The Amber (Amer) Fort is laid on a four-level layout and is known for its artistic design and craftsmanship. It is among the best places to visit in Rajasthan. The fort is a perfect example of red sandstone and marble architecture. The fort has attractions like the Hall of Public Audience, Hall of Private Audience, Sheesh Mahal and Sukh Niwas. The Sheela Mata Temple’s fort displays a rich blend of Hindu elements, including several gates and cobbled paths. The Amber Fort witnesses thousands of travellers from all over the world daily.
Amber Fort visitors can also enjoy the light and sound show held at Kesar Kyari inside the fort every evening. 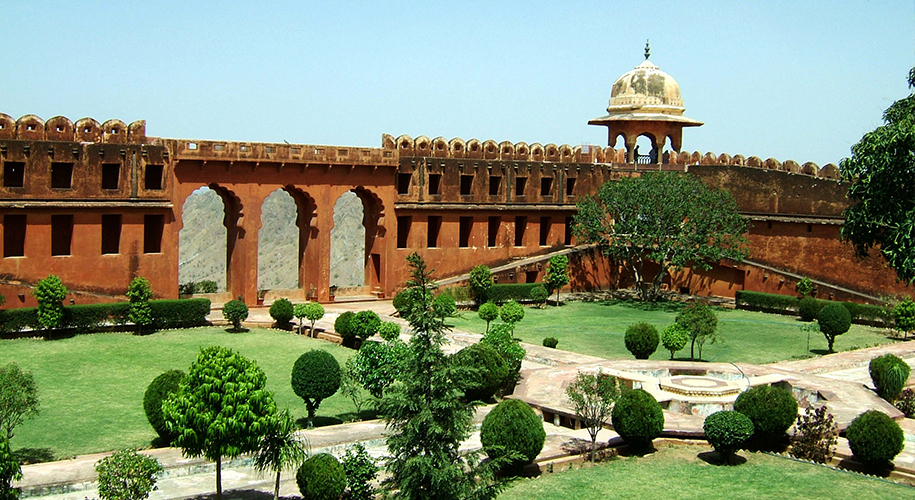 Built by Jai Singh II in 1726 as a protection for the Amer Fort, the Jaigarh Fort, often known as Victory Fort, was built in 1726 by Jai Singh II to protect the Amber Fort. The Jaigarh Fort stands on the foot of the Cheel Ka Teela. The most significant attraction of the fort is the grand cannon- Jaivana, which was then the world’s largest cannon on wheels. The fort comprises a complex network of passages and in-fort attractions like the Vilas Mandir, Aram Mandir, Laxmi Vilas, and Lalit Mandir. The fort museum has a vast display of antiques and armour belonging to several Rajput clans and displays the Rajasthani culture. 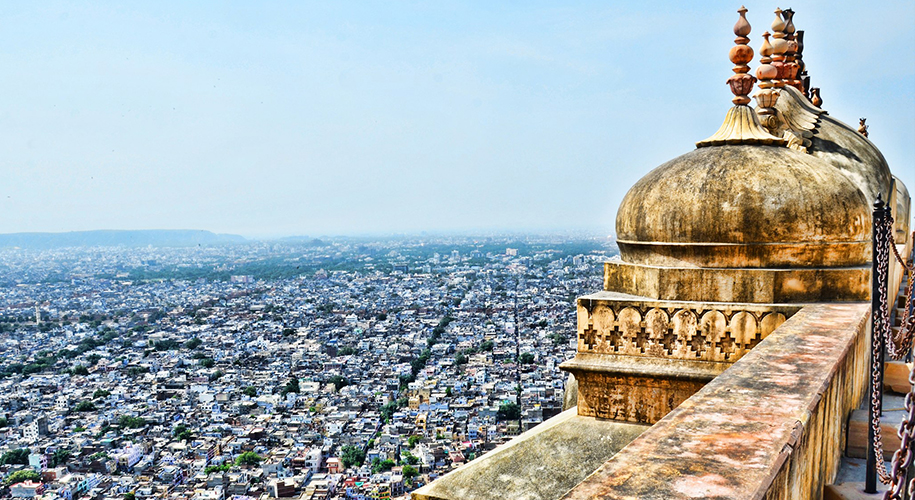 Built-in 1734 by Maharaja Sawai Jai Singh II, the Nahargarh fort is among Rajasthan’s most famous forts. Nahargarh Fort is standing on the edge of the Aravalli Hills, overlooking Jaipur. The extended walls of the fort are still in a lifelike structure as the fort never witnessed any attacks. It was a hideaway for the British army during the Indian Mutiny of 1857. Today the Nahargarh Fort is among the popular places in Rajasthan, located on the outskirts of the pink city. The major attraction of the Nahargarh fort is the panoramic view of Jaipur city and the step well. The museum within the fort displays a huge collection of armour and paintings. It also has a rooftop restaurant where you can relax and curb your hunger pangs. 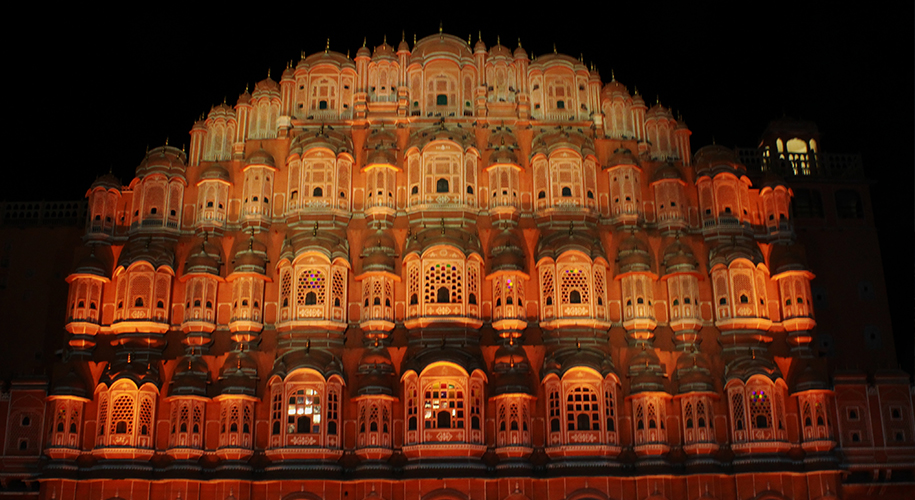 Situated in the centre of the bustling Jaipur city, the Hawa Mahal is one of the significant landmarks in the history of India. It reveals a rich Rajasthani architecture combined with the style of Islamic Mughal architecture. Maharaja Sawai Pratap Singh built the Hawa Mahal in the 18th century. The high-screen wall made from red and pink sandstone looks like a honeycomb web of a beehive. The palace has numerous windows, which were made for the women of the royal household to observe the street festivities inside the palace. The Hawa Mahal has approximately a thousand windows decorated with intricate designs, rooms with colourful marbles, and fluted pillars with lotus and floral patterns. It also has a courtyard that now displays a museum. 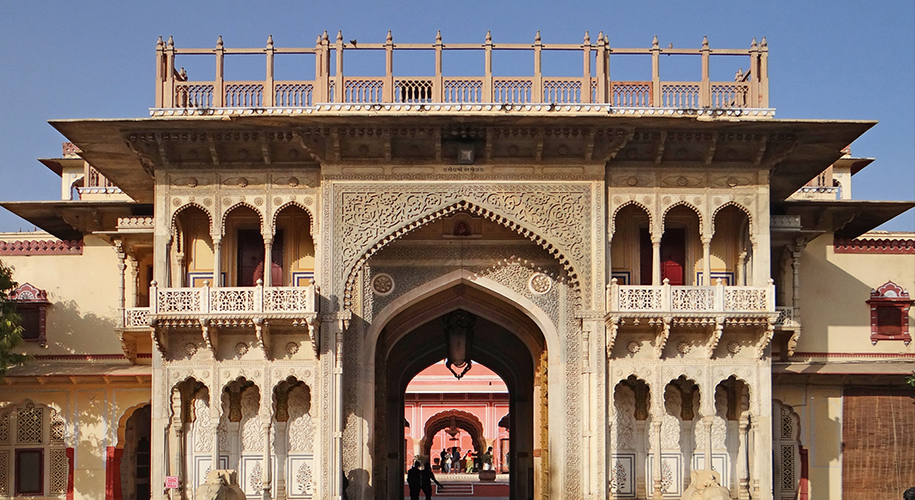 Your Rajasthan trip will be incomplete without visiting the famous City Palace of Jaipur. Standing in the heart of the Pink City, the palace is a fusion of Rajasthani, Mughal, and European architecture. Built by the great Maharaja Sawai Jai Singh II in 1732, the City Palace boasts exquisite architectural work and historical significance, making it an important Rajasthan Tourism site. The palace comprises several gateways, namely Virendra Pol, Udai Pol, and Tripolia, smaller palaces such as the Maharani Palace, Mubarak Mahal, and Chandra Mahal, the courtyard- Pitam Niwas Chowk, and prominent halls including Diwan-e-Khas and Diwan-e-Aam. The palace also has a museum, Bhaggi Khana, stocked with old carriages, palanquins and European cabs. The palace has a temple too, which is devoted to Lord Krishna. 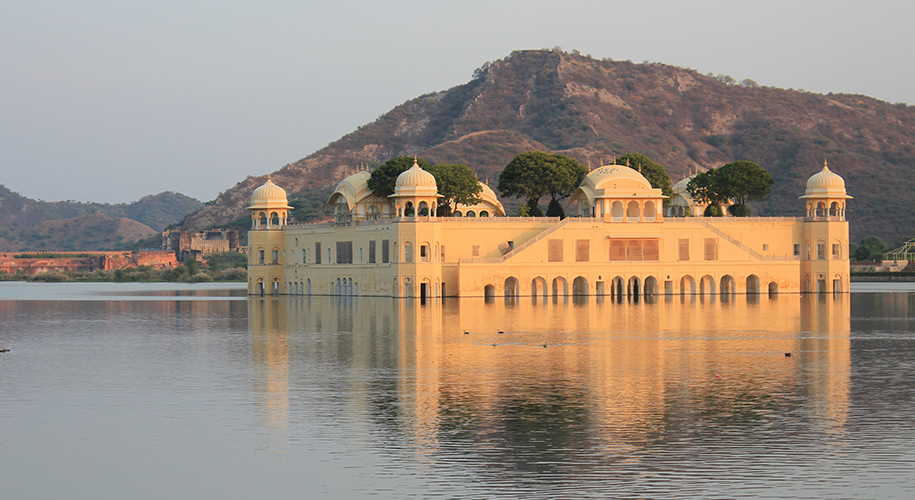 The Jal Mahal was created by Maharaja Jai Singh II of Amber in the 18th century and is located amidst Man Sagar Lake. It is another example of an exquisite fusion of the Rajasthani style of architecture and the Islamic style of architecture. This beautiful palace is a five-storied red sandstone structure with intricately decorated rooms, hallways and wall paintings depicting Rajasthani art. The Jal Mahal is surrounded by a large biosphere of the Aravalli range. The lush tropical forest surrounding the area, home to varied flora and fauna, enhances the palace’s beauty. For the tourists’ leisure, boat rides are available in Man Sagar Lake. The boats also are crafted in Rajasthani style. 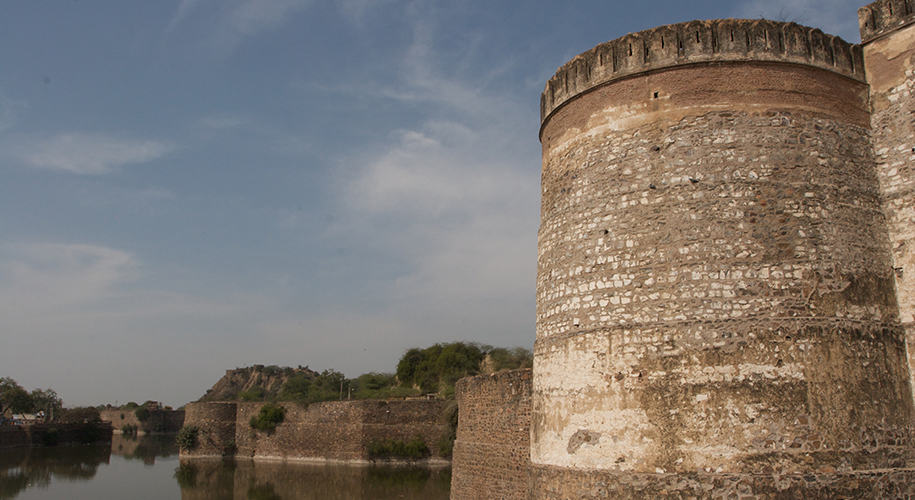 Said to be the “pride of India,” the Lohagarh Fort is situated in the heart of Bharatpur city. The fort was made to defend against the attacks of Mughals and Britishers in the 18th century and 19th centuries, respectively. The fort was known to be the strongest structure ever constructed in India. The fort has two gates- The Ashtadhatu Gate (main entrance) and the Lohiya Gate, which are made of different metals.
The Lohagarh Fort houses the two victory towers- the Jawahar Burj and Fateh Burj, commemorating the victory over the Mughals and British army. The fort also has three palaces – Mahal Khas, Kamra Palace and Badan Singh’s Palace. The Badan Singh Palace is the oldest of the three palaces. In 1944, the Kamra Palace and the hall of Badan Singh Palace were transformed into State Archeological Museum. It now has a fine display of antiques from Noh, Mailah, Bureh and Bayana villages belonging to the Kushana period and some displays of Arabic and Sanskrit manuscripts, armours and paintings. 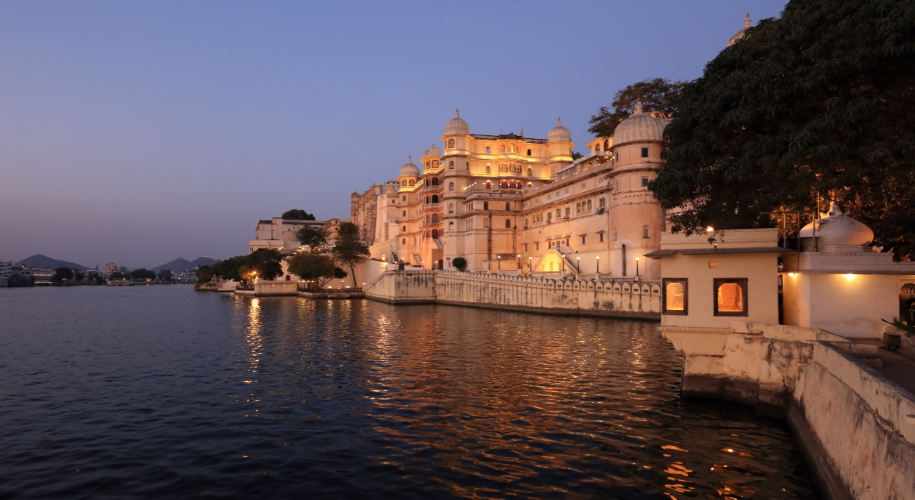 A sight to behold, City Palace sits pretty on the shores of Lake Pichola. Maharaja Udai Singh built it in 1559. A visit to the palace offers an insight into the royal lifestyle of the erstwhile monarchs of the region. The complex houses within itself several palaces. The interiors are ornamented with mirror work, murals, wall paintings and marble work. 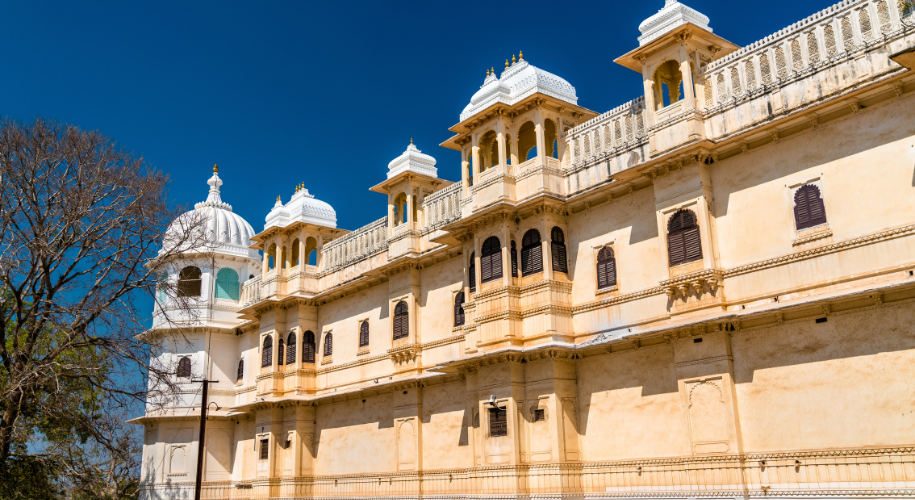 Rana Fateh Singh built Fateh Prakash Palace to showcase his inclination for culture and arts. The palace is a stunning sight, evoking awe in a single glance. In the latter half of the 20th century, much of the palace was converted into a museum where visitors could come across weapons, uniforms and local handicrafts. 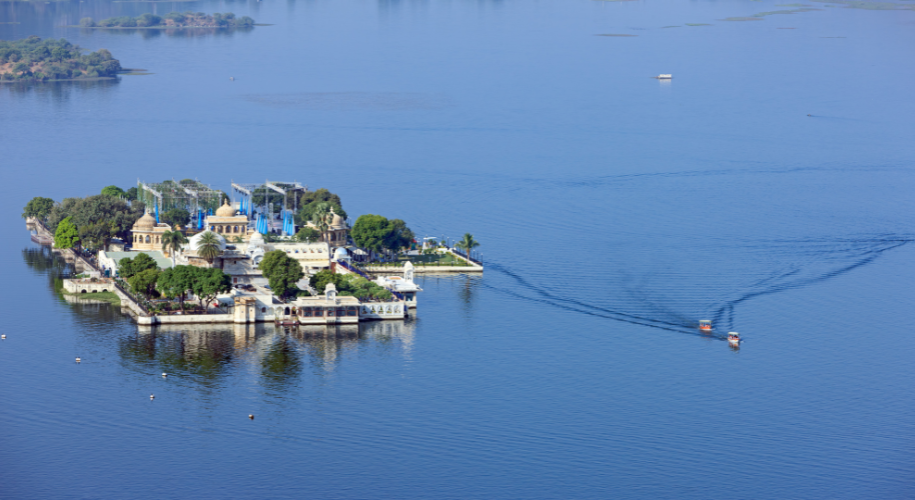 Although there is no shortage of palaces and forts in Udaipur, Jag Mandir Palaces stands out. It is settled on a small island at the centre of Lake Pichola. While it is a pleasing sight any time of the day, the palace looks extraordinarily bewitching during the evening and night, with lights reflecting on the lake’s surface.

To visit these great forts and palaces, you can book flights and hotels from HappyEasyGo. Users can also book heritage hotels in Rajasthan from the HappyEasyGo website or app.

To visit these great forts and palaces, you can book flights and hotels from HappyEasyGo. Users can also book heritage hotels in Rajasthan from the HappyEasyGo website or app.

Previous Post: Top Tourist Attractions in Goa to Visit on your Vacation
Next Post: Top Destinations for Best Wildlife Experience in India