Visiting the many monuments that mark the landscape of India is the perfect way to learn about the intriguing history of our incredible country. So, we have brought this list of India’s most famous historical places for all history buffs. Without any further ado, let us get on with this list.
Must-Visit Monuments in India 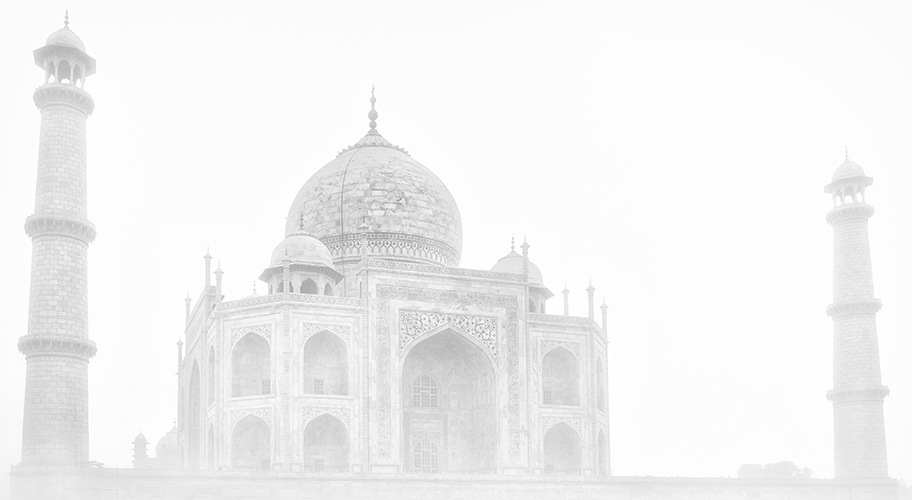 Counted among the ‘New 7 Wonders of the World,’ Taj Mahal is undeniably the most iconic Indian monument and famed historical place in India. The white marvel draws visitors from all over the world with its sheer grandeur and architectural brilliance. Shah Jahan built this monument in memory of his beloved wife, Mumtaz Mahal; hence the name ‘Taj’. If you have not yet marvelled at this thing of beauty, then book cheap flight tickets to Agra immediately. Another renowned monument by Shah Jahan, Red Fort, was constructed when the Mughal emperor decided to move his capital from Agra to Delhi. It is the perfect example of the military might of the Mughals. The imposing, red sandstone walls of the fortress also played an important role in modern India. Every year, the Prime Minister of India addresses the nation from this historical monument. 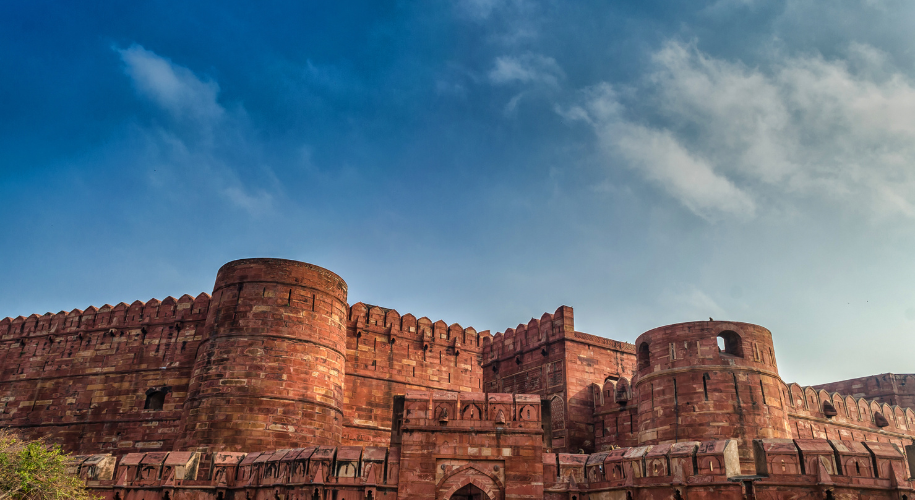 Sitting on the right bank of Yamuna River lies an epitome of Mughal architecture, the Agra Fort. Agra Fort is a must-visit for you if you are a history buff. This 16th-century fort is one of the most beautiful historical monuments in India. It was formerly a walled city built during the reign of Emperor Akbar. Agra Fort is also among the UNESCO World Heritage Sites in India. The fort boasts intricate marble artwork and delicate artwork on sandstone walls displaying a medley of different architectural styles. This historical monument in Delhi is the epitome of calmness and serenity amidst the city’s hustle and bustle. The shrine is open for devotees of all religions and is a must-visit for those seeking spiritual bliss and enlightenment. The Mughal Emperor Shah Jahan constructed this architectural beauty with red sandstone and white marble. The tall minarets, arched gateways, wide staircases and huge courtyard of this monument are among its highlights.

Lotus Temple or the Baha’i Lotus Temple or Kamal Mandir is a marvellous architecture shaped like a white lotus flower. Visitors can connect here with their spiritual selves through prayer and meditation. Nature lovers can stroll around this temple’s lush green gardens, bursting with colourful flowers and nine reflecting pools. 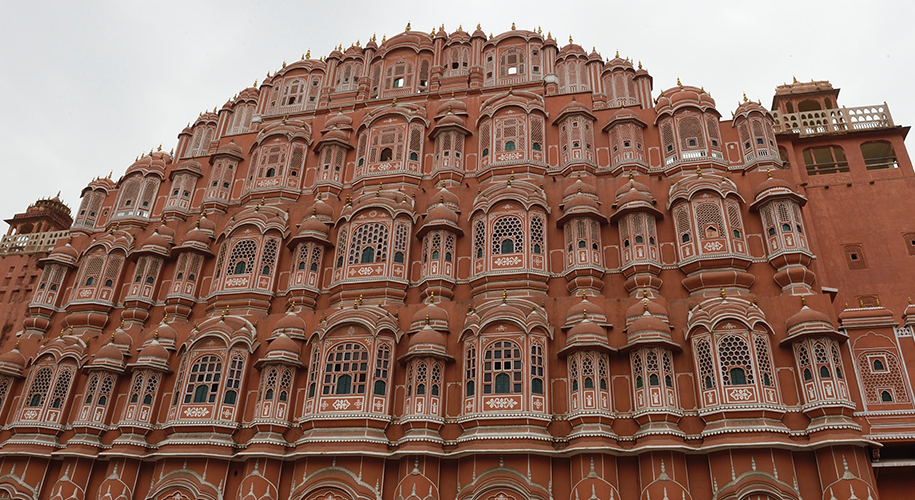 Although the ‘Pink City’ is home to several monuments, the first one of these to land on this list is Hawa Mahal or the Palace of Winds. Made with pink and red sandstones, the monument was built so the royal family’s women could experience the liveliness and hustle-bustle of the local markets. It is one of the many important monuments of India, built by Maharaja Sawai Pratap Singh, the founder of the city of Jaipur.

Named after Queen Victoria, Victoria Memorial is an elegant white structure in the heart of the ‘City of Joy.’ Adding to the structure’s charm are many sculptures and statues scattered in the gardens surrounding the building. It was built between 1906 and 1921 and showcased the Indo-Saracenic revivalist style of architecture. The monument is counted among India’s most famous historical places and must-visit points of interest in Kolkata. 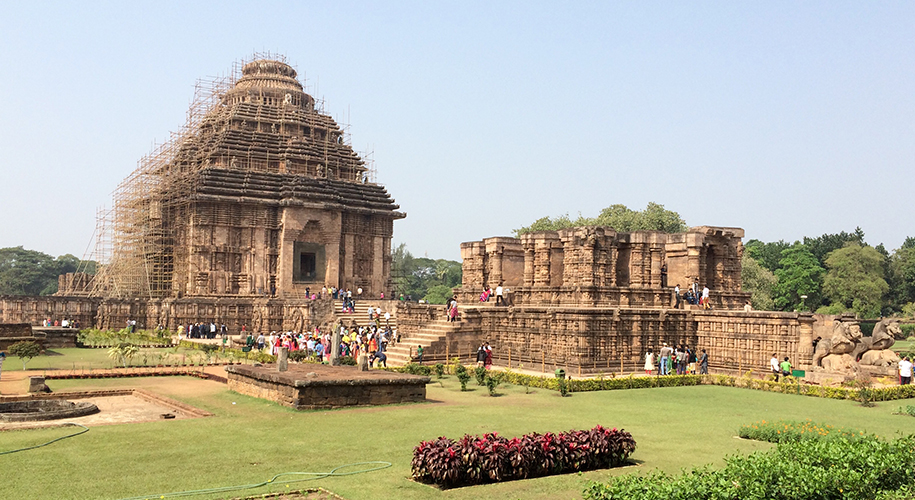 The UNESCO-listed Konark Sun Temple in Orissa was built in the 13th century. Dedicated to the sun god Surya, the shrine was commissioned by king Narasimhadeva I of the Eastern Ganga dynasty. It is created as per the Kalinga style of architecture. Though most of the structure is in ruins today, it is a great place to admire the architectural brilliance of the bygone era. 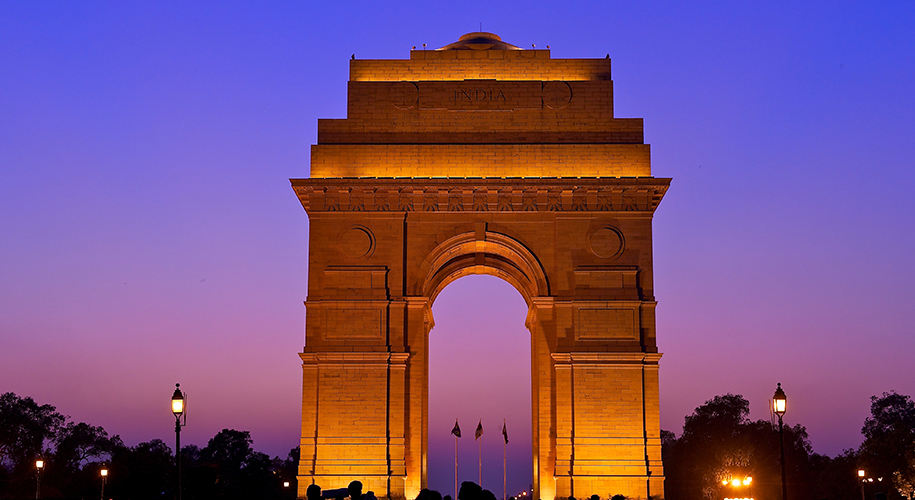 Book your flight tickets to Delhi to visit the 42-metre tall India Gate, a war memorial built in honour of the Indian martyrs of the wars between 1914 and 1919. It is among the most sought-after hangout places in the national capital. The soaring monument features the names of thousands of Indian soldiers. It has a striking resemblance to the Arc-de-Triomphe of France. 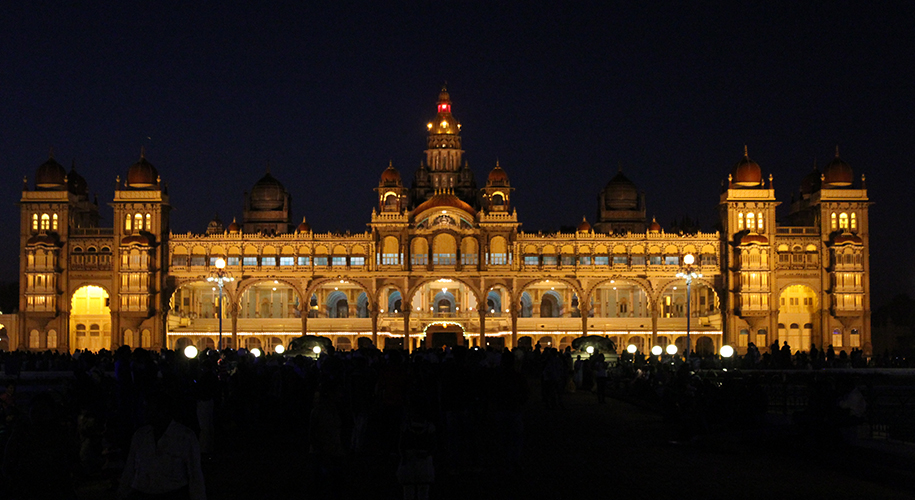 Mysore Palace is a historical place and royal residence of the monarch of Mysore in the state of Karnataka. The best time to plan a trip to Mysore is Diwali, when the palace looks gorgeous, adorned with thousands of lights. The monument is built per the Indo-Saracenic style with a hint of Mughal, Rajput, Hindu and Gothic architectural styles. 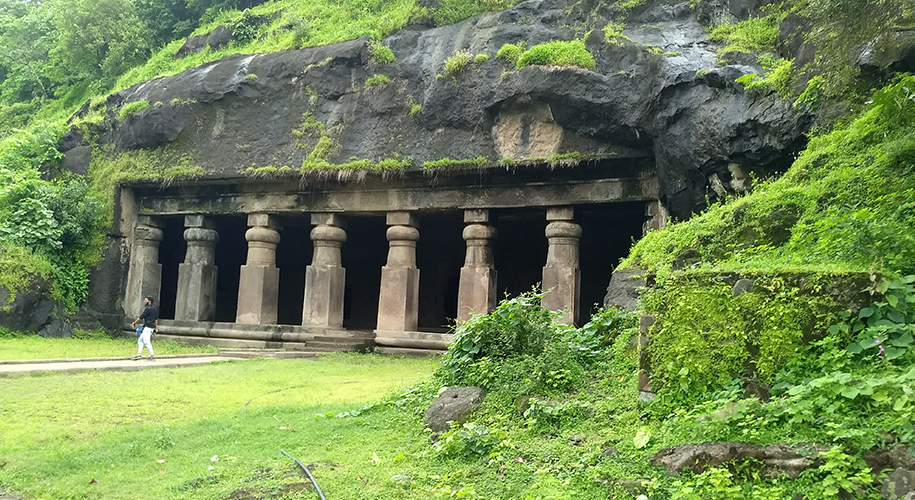 Our list of top historical places now takes us to the ‘Financial Capital of India.’ About 10 km east of Mumbai is an island, locally referred to as Gharapuri, which features rock-cut Elephanta Caves that trace their history back to the mid-6th century. Once boasting elaborate paintings, the caves today are essentially in ruins. The complex is comprised of five Hindu and two Buddhist caves. Besides history enthusiasts, the place is also frequented by many trekkers. 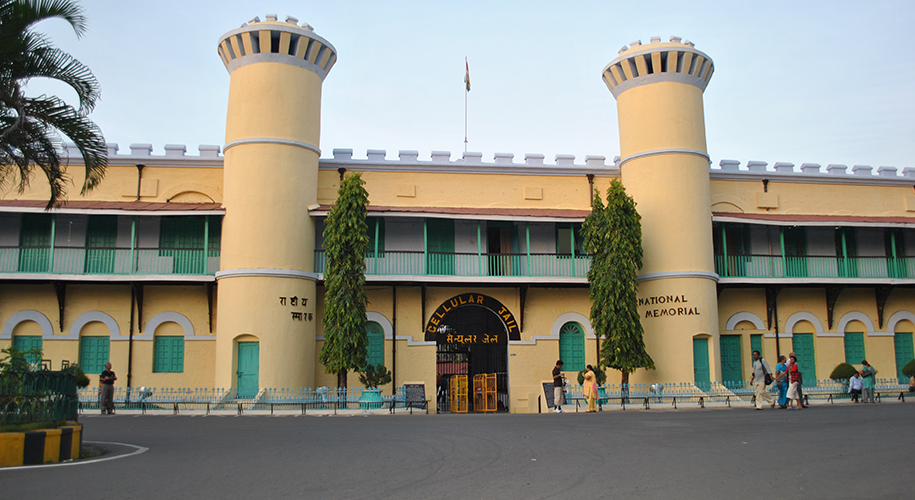 If you consider yourself a nature lover, you must visit Andaman & Nicobar Islands at least once. The archipelago, is situated in middle of the India Ocean, is home to some of the most awe-inspiring beaches around the world. A few are Radhanagar Beach, Wandoor Beach, Elephant Beach and Vijaynagar Beach. However, on your trip, you should not miss visiting the Cellular Jail, home to political prisoners in British India. Today, it serves as the national memorial monument. You can book cheap hotels in Andaman in advance to avoid the last-minute hassle of your stay. No list of India’s most famous historical destinations is complete without mentioning Hyderabad, and the iconic Charminar of Hyderabad is why. Built-in 1591 by Mohammed Quli Qutb Shah to commemorate the end of the plague, the 56-metre tall structure stands at the heart of the city’s renowned Laad Bazaar. So, do not forget to indulge in some retail therapy. Grab an air ticket deal already. 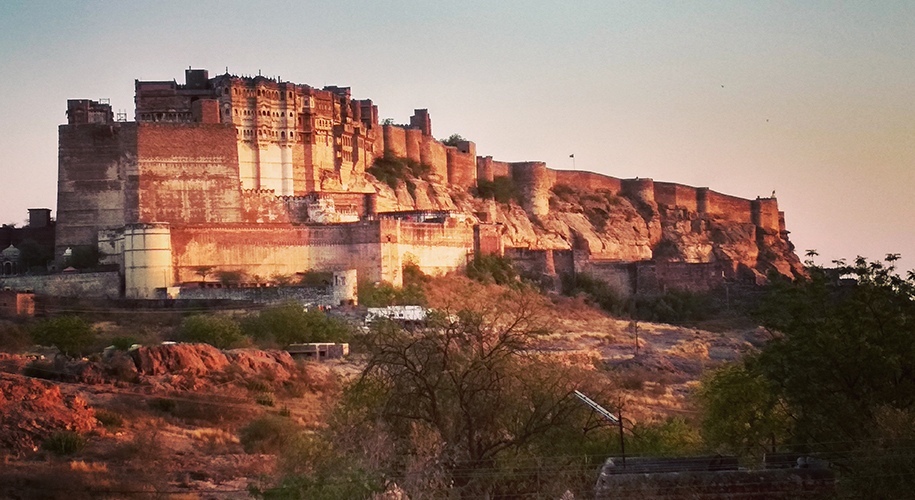 Mehrangarh Fort is counted among the largest fortresses in the country. It is perched on top of a hill and overlooks the city of Jodhpur. The 15th-century fort is home to a museum where one can come across paintings, weapons and other artefacts belongings to the royal family of Jodhpur. Plan a trip to Jodhpur and get ready to capture mesmerising vistas of the ‘Blue City’ from the fort. 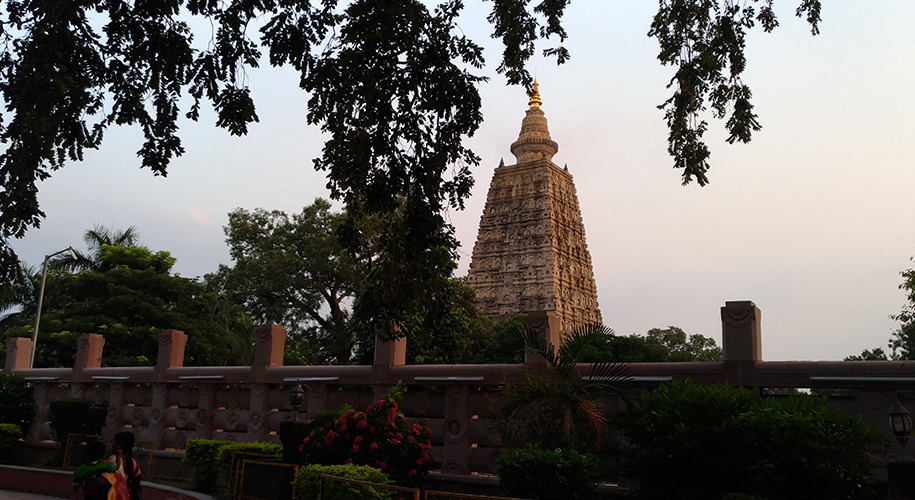 A part of UNESCO’s list of World Heritage Sites since 2002, Mahabodhi Temple in Bodh Gaya, Bihar, is among the four holiest Buddhist sites related to the life of Lord Buddha. Emperor Ashoka built a shrine here in the 3rd century, but the one you see today was built later in the 5th and 6th centuries. Constructed entirely of bricks, it is one of the earliest Buddhist temples in India still standing. Hence, part of this list of India’s most famous historical places.

The UNESCO-listed Jantar Mantar comprises 19 architectural astronomical instruments, including the world’s largest stone sundial, built by Sawai Jai Singh II. Built-in the 18th century, the complex and its many instruments are still functional and draw a vast number of tourists every day. If you ever book cheap flight tickets to Jaipur, do not forget to visit this historical place.

Among the most iconic landmarks in Mumbai, the Gateway of India was built to commemorate the arrival of King George V and Queen Mary in India in 1911. The monument’s construction was completed in 1924, and ever since, the monument has been one of the most frequented hangout spots in the city. A historical village in the state of Karnataka, Hampi is thronged for its many temple complexes that date back to the Vijayanagara Empire. The group of monuments in the village were inscribed on UNESCO’s list of World Heritage Sites back in 1986, which is a testament to this place’s historical and cultural significance. If you like exploring history, then this is a place you must not miss exploring. 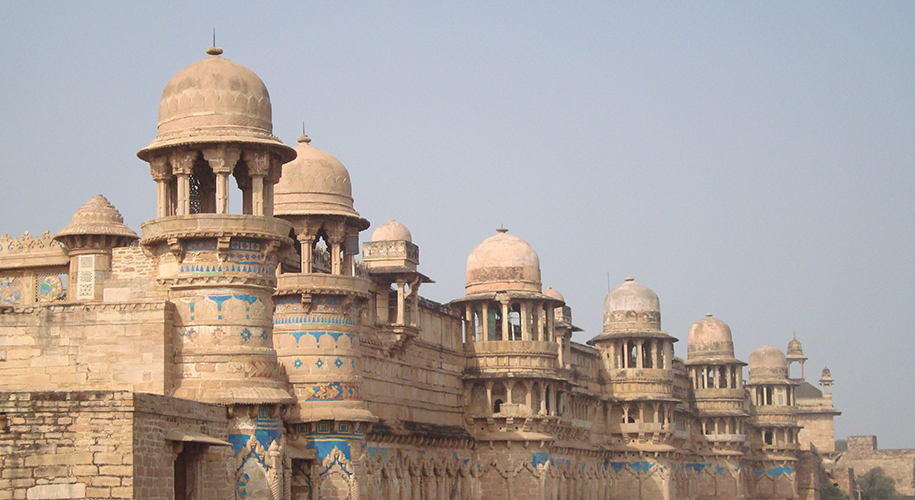 Near the eponymous city, Gwalior Fort, a hill fort is believed to be at least a millennium old. Several inscriptions and monuments within the fortress even indicate the existence of the structure even at the beginning of the 6th century. It is also considered as an impregnable fort. If you happen to travel to Central India, an excursion to Gwalior Fort is a must. 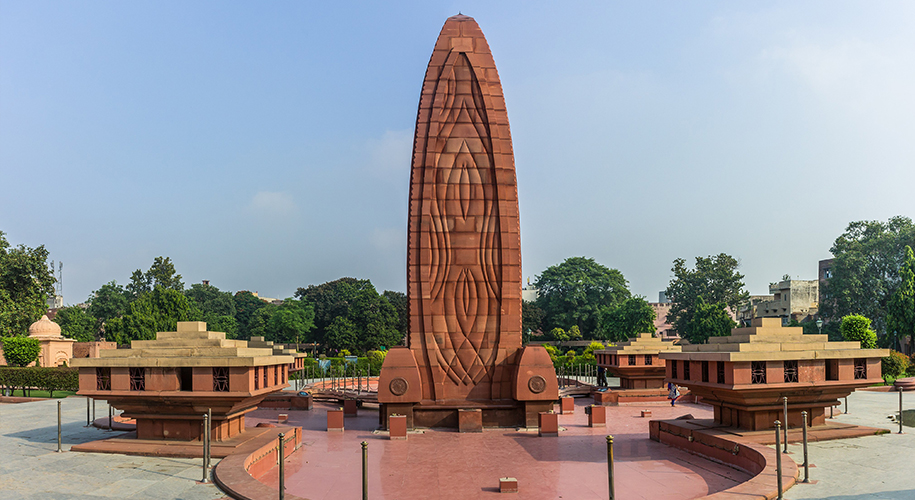 A memorial of national importance and historical garden, Jallianwala Bagh in Amritsar is a reminder of the massacre that took place here in 1919. It is one of the most tragic chapters in the history of India, and hordes of travellers coming to Amritsar learn about the same by visiting Jallianwala Bagh. The marks of bullets on the garden walls can still be seen at the site. 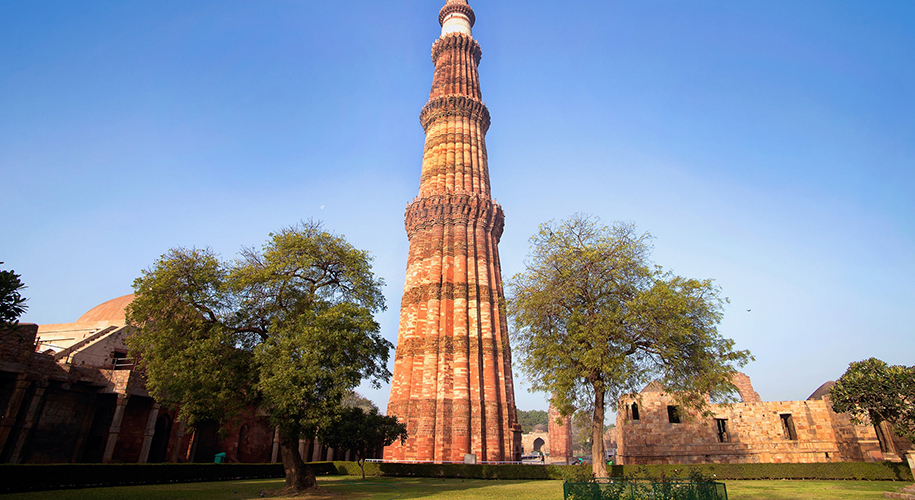 Next on this list of top historical places in India is another gem in the crown of Delhi, Qutub Minar. Built-in 13th century, the minaret soars to a height of about 72.5 metres with a diameter of 14.32 metres at its base and 2.75 at its peak. Standing in the complex’s courtyard is a 7-metre tall iron statue which is also a major attraction. 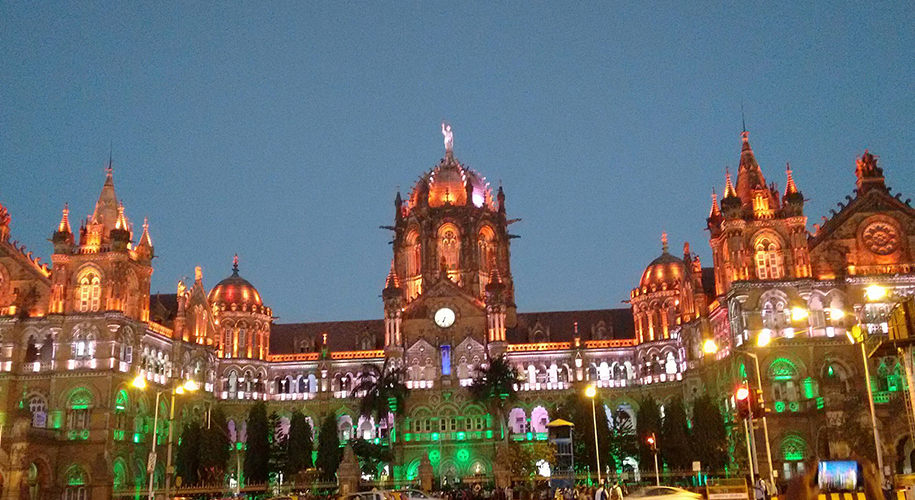 Formerly known as Victoria Terminus, Chhatrapati Shivaji Terminus is a historic terminal station in Mumbai. Chhatrapati Shivaji Terminus is not just the gateway to the financial epicentre of India but also an architectural beauty and a sight to behold. That is why it is often counted among the must-visit places in Mumbai and top historical places in India. 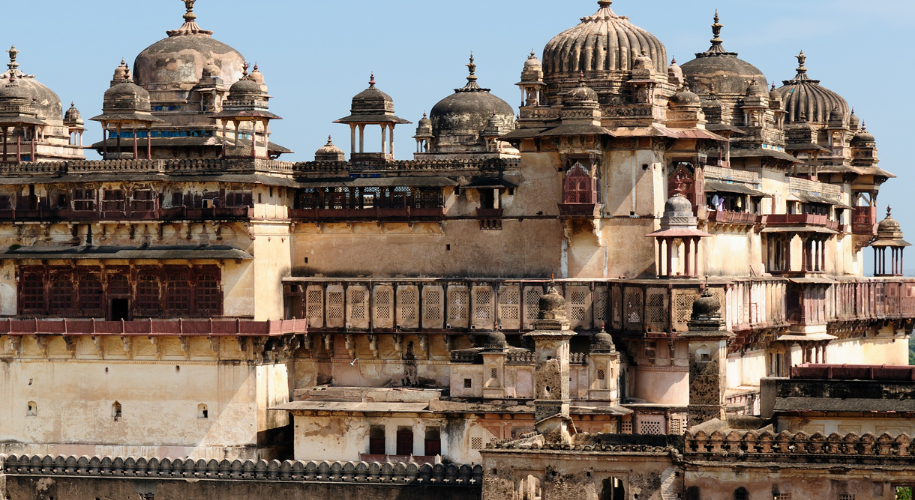 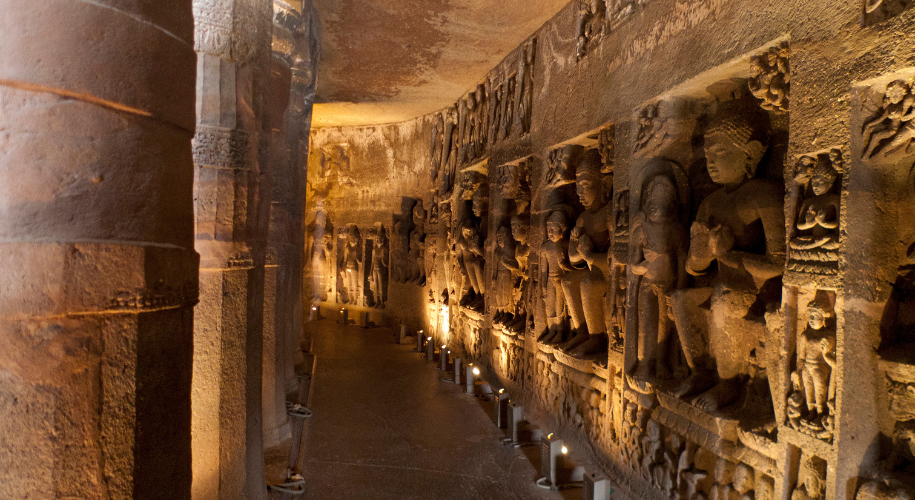 The Ajanta Caves are 30 rock-cut caves that date back to the second century BC, making them one of the country’s oldest caves. These Buddhist temples are notable for their murals, paintings, and sculptures, which have helped to define Indian art over time. The Archaeological Survey of India has declared them a UNESCO World Heritage Site and a protected monument and is one of the most popular monuments in India.

There are our top monuments in India. How many of these have you visited? Which one is next on your list? Get the lowest fares on hotels in India with HappyEasyGo and explore them all! We also have the lowest flight booking prices to help travellers save even more.